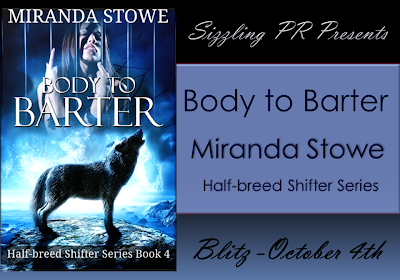 Brynn Griffin has always known the Muhlikari pack of absolute pure-blooded wolves has no tolerance for her for kind. They kill half-breed shifters without mercy. So, when she’s captured by one of them, she's willing to do anything to stay alive, even grant her captor sexual favors. But she never counted on being enthralled so completely.
Gannon recognized Brynn as his mate the moment he smelled her. After she's injured, he secretes her back to his den to heal her. But to keep her safe within his pack, he must pretend she's his pet and lock her in a cage. If anyone found out she was his life partner, they'd kill him and her both without a moment's pause.

Love and passion collide with danger and savagery the moment these two meet. But to stay together, they're willing to risk bringing down the wrath of both of their worlds and fight for a new way of life.


Brynn Griffin gained consciousness with a pained gasp. The strong odor of wolf assaulted her senses. It lingered everywhere, coating the room, her body, the swaying and cold metal floor under her cheek.
Tensing, she kept her eyes closed as she tried to orient herself. Either her equilibrium was so off whack it couldn’t steady itself or she was lying on something hanging suspended from the ground. Something that rocked slowly like the pendulum of a clock.
“There’s no need to fake it, human. I know you’re awake.”
The deep voice jarred through her, making every muscle in her sore body spasm with fear. Tentatively, she lifted her face. Okay, so she was most definitely hanging above the ground…in a huge birdcage, something a stripper would sit in and pose on a swing to entice the men watching her.
Staring past the gilded metal rungs capturing her inside her domed confines, she studied the dark room around her. Chilly and cave-like with a humid, underground quality, she was surprised the walls and floors weren’t made of stone. A tacky bright red shag carpet covered the floors. The walls were painted a warm, golden brown. Shelves and desks lined the walls, crammed into the room and filling every available bit of space. 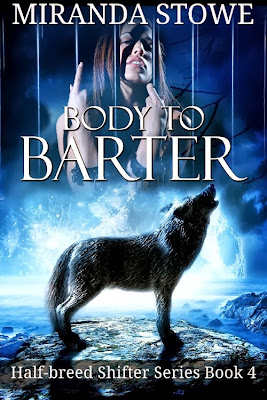 The owner obviously liked to collect things, hoard them. She had a bad feeling she’d just becoming his newest possession.
When her gaze found his, she froze…as in she stopped moving and dropped about twenty degrees in temperature.
A pair of almond-shaped, nearly glowing eyes studied her from the dark. He stepped out of the shadows, a massive form, shaggy midnight hair hanging down his face and over his shoulders, which were as thick as boulders.
His skin gleamed a bronzed chestnut, no doubt seeing plenty exposure to the sun. He didn’t wear clothes but draped some kind of loincloth thingy between his legs.
Savage and earthy, he was no kind of shape-shifter she’d ever encountered before.
He was an absolute pureblood.
Brynn shuddered and licked her parched lips. His yellow-brown eyes tracked the movement. “Please,” she whispered, her voice cracked dry and hoarse. “Let me go.”
He smiled, showing off a mouth full of wolfy teeth. “And why should I do that, precious? I’ve always wanted a human for a pet.”
She sniffed, straightening her back rigidly. “I’m far from pure human.” She’d tried too hard to be nothing but human. She’d fallen in love with a human and thought she could live the rest of her life without ever changing into her hairy form again. But she’d made the tactical error of trusting her human lover with all her secrets. When she confessed her jaguar side to him, he’d scorned her, repulsed and horrified.
So no, she could never fully be human, not for as long as she lived and no matter how much she wished it to be so.
Her captor tossed her a wicked grin that should’ve looked threatening but somehow also manage to send a bolt of awareness roaring through her.
“If you’re not human,” he countered, “then why does all your fur melt away when you’re unconscious?”
She blushed, humiliated about every inch of skin he’d no doubt seen when she was vulnerable and passed out. Curling her arms and legs more tightly around her and making sure all her privates were covered, she glowered. “Just because I’m a half-breed doesn’t mean—”
“Yes, it does!” he snapped, his eyes flashing with hate. “You’re an abomination to our kind.”
“I can’t help what I am,” she shot back, her own temper flaring.
He was at the cage before she’d even realized he’d moved. Arms snaking between the bars, he grabbed her throat, clutching with his unbelievably strong fingers, and yanked her close until their faces were a scant inch apart. Though she feared him, his heat was soothing.
Another tremble seized her.
“Little human should know better than to talk back to me,” he warned, his breath—smelling of fresh apples and making her stomach cramp with hunger—wafted across her cheeks.
“Just…let me go.” Her teeth began to chatter. “You don’t want me here. I can see the hate in your eyes, smell it seeping from your skin. Let me go.”
His yellow eyes took on a mocking smirk. “And what would I get in return for doing you such a service, half-breed?”
“I…” She frowned, uncertain of what he meant. “I don’t know. I…I’d give you anything. Money?”
He snorted. “I have no need for your human money. I don’t associate with those pathetichomo sapiens. Or their traditions and forms of bartering.”
“But…but…there must be something I have to barter,” she tried. There had to be. Otherwise he would’ve already killed her by now.
“Yess,” he hissed out the word in a reptilian sneer. His gaze roamed her from head to toe, touching her body in the most intimate kind of caress. “I believe you do have something to barter.”

Miranda lives with her wonderful, Brad-Pitt-lookalike husband (hey, they're both blond-haired and blue-eyed) and adorable still-needs-to-learn-the-meaning-of-NO toddler daughter on their spacious corn-field-and-cow-pasture-front property in Kansas. Librarian by day and author by night, she is also published in YA and contemporary mainstream romance under a different pen name.

Where to Stalk Miranda: