Elizabeth DeVille doesn't belong at a party like this - one where the gowns cost more than her Camry and cigars run higher than her grad school utility bills. Dragged out of seclusion by her best friend Suri, Elizabeth is merely playing dress-up, rubbing elbows with a crowd that banished her troubled family years ago.

Hunter West is tired. Tired of parties, tired of pretending, and tired of trying to right a wrong that haunts him every day. Bourbon heir and professional poker player by day, by night Hunter is gambling with his life in a 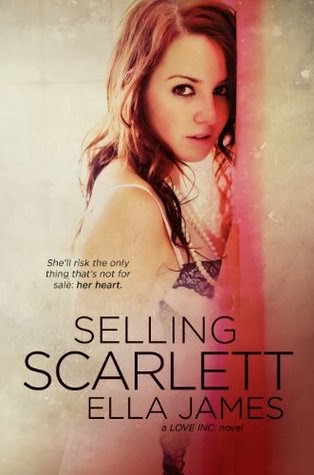 high-stakes game of crime and blackmail.

When Elizabeth stumbles into Hunter's den of vices, she's a light in the darkness, a flame in the void. And, just like everything he touches, Hunter mars her in a record time. To rectify the damage done, Elizabeth needs money she doesn't have, and she's come up with a foolproof way to get it.

Follow Elizabeth - code-named Scarlett - to the lush Nevada brothel where she'll auction her virginity and risk the only thing that's not for sale: her heart. The highest bidder is a familiar face, with wicked hands and the devil's mouth. And a secret so dark that it could cost her life.


Ella James is a Colorado author who writes teen and adult romance. She is happily married to a man who knows how to wield a red pen, and together they are raising a feisty two-year-old who will probably grow up believing everyone's parents go to war over the placement of a comma.

Ella's books have been listed on numerous Amazon bestseller lists, including the Movers & Shakers list and the Amazon Top 100; two were listed among Amazon's Top 100 Young Adult Ebooks of 2012.

To find out more about Ella's projects and get dates on upcoming releases, find her on Facebook atfacebook.com/ellajamesauthorpage and follow her blog, www.ellajamesbooks.com. Questions or comments? Tweet her at author_ellaj or e-mail her at ella_f_james@ymail.com.

Ella is represented by Rebecca Friedman of the Hill Nadell Literary Agency.

Okay so I should mention that I read the second book before the first and so I was a little thrown off when reading this one. Now with that said I was confused a lot for the first half of this book. It was hard to sometimes tell what was going on and who it was going on with especially because our main character Elizabeth had like 5 different names, depending on who was talking to her. And there was just soooooo many layers to this book.

You have the whole Elizabeth and Suri friendship. Suri and her boyfriend. Suri and the fact that she is in love with Cross. Cross is in love with Elizabeth. Elizabeth has been crushing/lusting after Hunter since she was 16. He's into Elizabeth (obviously from one scene) but he's sleeping with....well....depending on when lots of people, but for this purpose he's sleeping with Priscilla. And let me say that women will sleep with anything...good lord. Also Merchant is thrown in there too. And of course we have the families who are a bunch of idiots and such and honestly at points I felt like I was watching a soap opera....which might be why I loved this book as much as I did. I love books that give you lots of plot twists and turns and layers and keep you guessing until the very end.

And by the end of the book I was head over heels in love with Elizabeth and Hunter. However, there were sooooooooooooo  many times that I wanted to smack Hunter in this book I lost count. AND OMG I HATE AND I MEAN HATE stupid Priscilla. EVERY freakin time that woman came on scene in the book I wanted to scratch her eyes out and throw her into a white padded echo room so all she could do was hear the sound of her voice and NEVER talk to anyone ever again.

Anyways so the gist of this book is a lot of lies and deceit. Some tragedy strikes in Elizabeth's life and she decides to take some drastic actions to help out a friend. And introduce Scarlett. When Elizabeth becomes Scarlett I think that is probably one of my favorite parts of the book because the women in Merchant's "love shack". But Scarlett is going to sell her V-card to the highest bidder. Whilest all this is going on she's pretty much in love with Hunter and he seems to pop up and you get the sense that he does like her....he remember's things a guy who isn't interested wouldn't remember. But he's got problems of his own and his own secret shady past to deal with. And Priscilla. Ukkk. Anyways lots of blackmail and backstabbing and lying and sabotaging and all around messed up stuff happens in this book. But it is defiantly worth the read. This book was amazing!!!!

Incinerate
Posted by Meagan at 6:00 AM