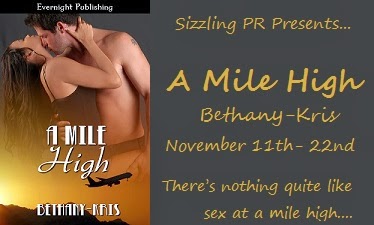 
Olivia wants a vacation, that’s all, but when the airline screws up her plans for a getaway to the beautiful Barbados, instead putting her on a new path that intertwines with the handsome, funny, and charming Sal, she can’t say no to his offer of joining the mile high club. Their meeting is explosive, attraction intense, and when the flight ends, Olivia is unwilling to part ways but unable to voice her wants. Still, fate is at work with its own plan, and where it finishes just might not be where it ends up.
There’s nothing quite like sex at a mile high.
Excerpt:


“All right, give me another.”
Sal contemplated for another moment, placing his empty glass to the attached table beside his seat. Arms crossed over that broad chest, arms flexing and muscles straining beneath the thin t-shirt. He shifted in his seat, the dark wash jeans he wore showcasing the thick bands hidden under that fabric as well. I had a feeling this man was no stranger to hard work. I couldn’t help but watch his movements, thoroughly enjoying the show in front of me and thanking whatever gods had decided to be my friends for the day that this was the flight I had somehow managed to get put on instead of some other one with less likeable, or good-looking, characters.
Screw Barbados, this Newfoundland islander was better looking than anything I could have met there. And I had a few hours of him as my first-class partner, too.
The plane had already begun its taxi to the runway, the two flight attendants at either ends of the plane talking over the speakers and giving the usual safety precautions and rundown. I blocked their droning out as Sal still sat silent, leaning over the side of his seat to look down the aisle at the woman who looked like Barbie in the flesh. Jealousy raged a war through my blood. There was no way in hell that woman looked better than I did.
I cleared my throat again to get his attention. Giving me a sideways glance, he nodded at the flight attendant ten feet away. “Shit-picky.”
Wine choked in my lungs. “Excuse me?”
“That attendant up front, that’s how she looks. Shit-picky.”
Unhinged giggles were muffled by my hand. “Does that mean like a plastic doll or something, because…” Trailing off, I snorted and shrugged, “…yeah, that’s the impression I got.” 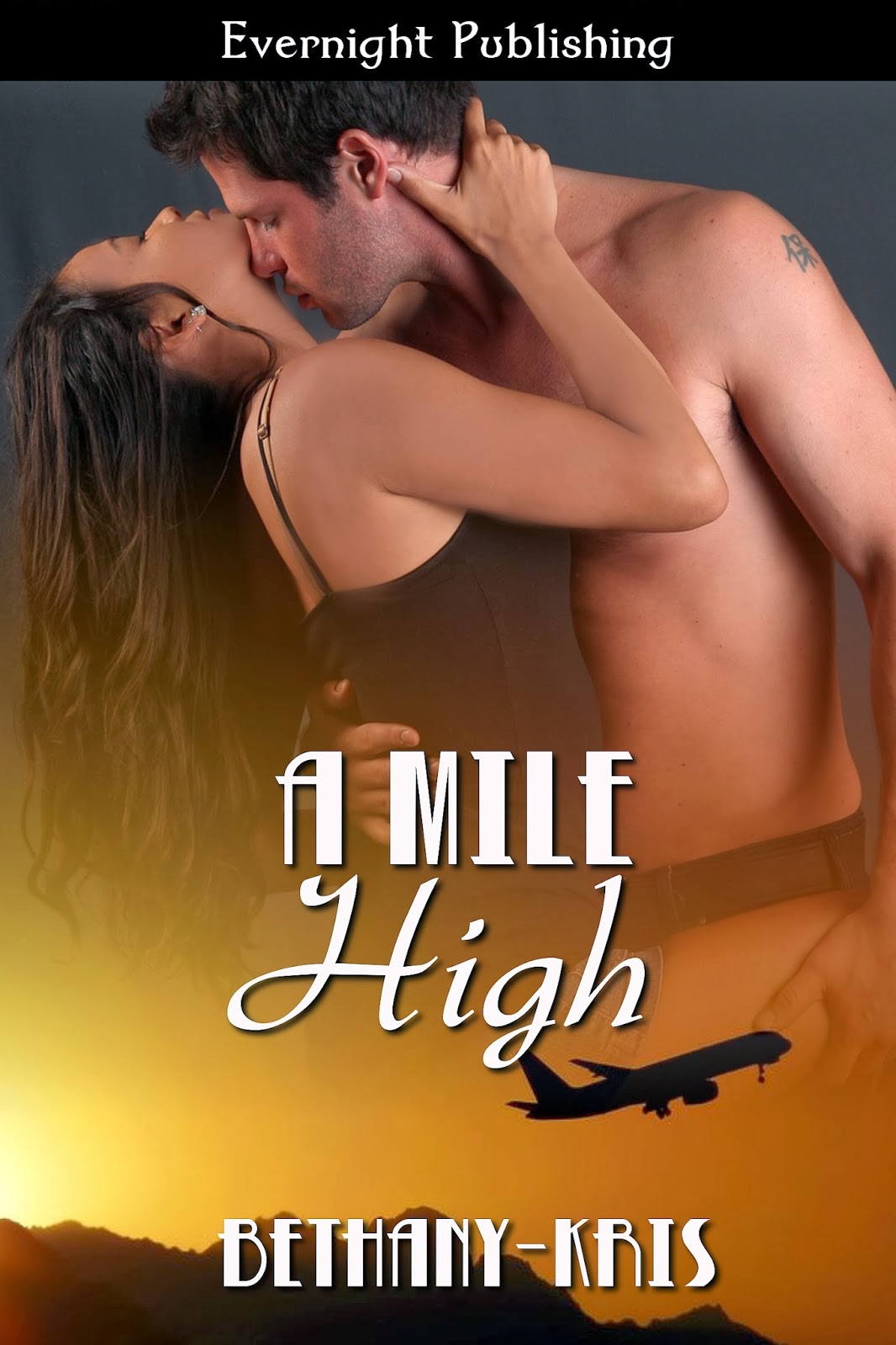 He looked confused. “No, she’s turning green up there, like she isn’t well or whatever.”
Wondering what in the heck he was talking about, I turned around in my seat to look as well, but the plastic partition behind my seat meant for privacy blocked my view. Leaning over my seat to look down the aisle, I could plainly see the flight attendant from earlier was indeed turning a sickly shade, and the more she spoke, the worse she looked.
“I think she’s…” I didn’t get to finish my sentence before the woman ripped off her headphones and disappeared behind the curtain that led to the front section of the plane. “…Sick,” I finished lamely. “Damn it, now we’re going to have to return back to the airport. This day couldn’t get any worse, I swear.” Sitting back in my seat, I unbuckled the belt just as the flight attendant who had been in the coach section rushed by our seats. “And I need to use the bathroom.”
“Doubt it,” Sal put in quietly. “Pilot’s all ready to go, we’re away from the gates, and there’s another plane bussing in to take off behind us right now, probably. We’re taking off. Her friend will likely give her some Gravol, set her up in their little section there, and we’ll be on our way.”
A quick, vague apology sounded over the plane’s announcement system, informing the passengers it would be another minute before takeoff. Given I had a bit of time to do whatever, I decided to use the bathroom. Excusing myself from our comfortable little cubby, I made my way through to the back of the plane, ignoring the questioning gazes of other passengers in coach who were likely wondering what had happened up in first class.
In the panic-worthy, small as hell bathroom, I washed my face and hands, checking my face out in the mirror as a ding sounded above me. I looked up to see the seatbelt sign had appeared just as the pilot’s voice sounded over the speakers, asking everyone to buckle up and ready for takeoff.
Making my way back to my seat as quickly as possible, I had just moved in to sit down—Sal drawing in his stretched out legs to let me through—as the plane jerked forward. I yelped under my breath, trying to catch myself but between the black, peep-toe pumps with a four-inch heel on my feet, and the sudden movement, I ended up on something warm…and hard. Something that breathed, chuckled, and touched me.
Sal.
My brown hair created a curtain over my face. Huffing a breath and blowing strands out of my line of vision, Sal laughed in my ear, rocking both our bodies. I felt his hands skim above my knees where the flimsy material of the skirt I wore had risen up. Gooseflesh pebbled at the motion and I tried hard not to shiver when fingers grasped tightly to my legs.
“You okay?” he murmured. “Because I think you’re just fine.”
I nodded, trying really hard not to be embarrassed. I didn’t want to show how turned on I was by his palms to my flesh and the suggestive tone to his words. “Yeah, just surprised. I’m so—”
“Don’t be,” he interrupted, voice turning huskier than I expected. “Unless you plan on moving, that is.”
Teeth cut into my bottom lip as I fought the urge to exhale harshly. “I have to. We’re just about to take off, right?”


The dismissive sound he made under his breath didn’t help the lust raging through my senses. Those warm hands of his skimmed a little higher under my dress, making me groan quietly, grinding my backside shamelessly against his jeans when he whispered, “You ever join the mile-high club?” 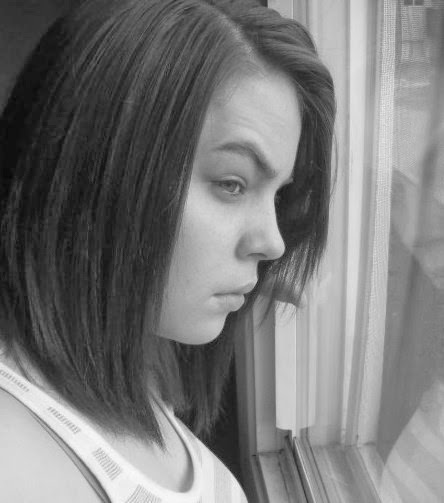 Bethany-Kris is a Canadian author, lover of much, and mother to two young boys, two cats, and two dogs. Between the children, her full time job, the animal farm her house has turned into, and a spouse calling over his shoulder, she is nearly always writing something…when she can find the time.

Where to Stalk Bethany:

I absolutely love loved this book and Bethany is an AMAZING writer. This short story had everything in it for me...especially on the hawtness factor. I loved Olivia's character and her strong willed and sassiness while still being vulnerable to the things around her. I could easily relate to Olivia's character and it almost made her seem more life like. And ohhh Sal.....words alone cannot do this man justice. I found myself drooling over him a few different times and then I would bust out laughing at some of the stuff he would say. I love the first meeting between these two and knowing that their romance starts on a plane is going to make a lot of women (after they read this book) want to jump on a plane and see if they can find their own Sal. I know that I do ;)  And these two fit perfectly and not at all together at the same time. In any other situation they would probably not glance at one another, but being on a plane...they meshed really well together. I can honestly say that I'm ready to re-read this book and fall in love with Olivia and Sal all over again and then maybe swoon some more. For being such a short story it was so complete. I'm one of those readers who loves multiple books in a series so I can fall more in love with the characters and their stories and I always want more with romance stories. And while I would gladly take another book of Olivia and Sal....I was not left wanting more (in a good way). This book had an amazing plot to go along with the characters and when you finish this book you just swoon. lol There's not really another way to put it....other than the fact that you're going to want to start all over from page one.

Overall, this was an amazing book and again a quick read for the weekend or a trip. I highly highly recommend this book and can't wait to read something else from Bethany-Kris because she has definately become one of my new favorite authors!!!

Incinerate
Posted by Meagan at 6:00 AM