the dead of night. Intrigued by the mysterious human, the commanding Alpha is determined to elicit all of her secrets, including her deepest fantasies. After tragedy strikes, Logan discovers dangerous adversaries are planning an attack in his city. Driven by responsibility and honor, Logan must protect both his pack and the woman who’s captivated his attention.

Dr. Wynter Ryan, a leading virologist, is fascinated with her charismatic protector. As the chemistry ignites between her and the dominant Alpha, she relinquishes her ties to the past, embracing ecstasy and submission within his arms and intrepidly acquiescing to her own adventurous instincts. Succumbing to desire, she learns to trust her Alpha, discovering what it means to be wolf.

Passion and mystery on the bayou stirs Logan’s wolf, demanding he claim his mate. Yet Wynter’s a distraction he can’t afford when his priority is to lead his new pack. Will Logan surrender to the uncontrollable need to claim Wynter as his mate? And will he be able to keep her alive, finding the killer who threatens the Acadian Wolves? 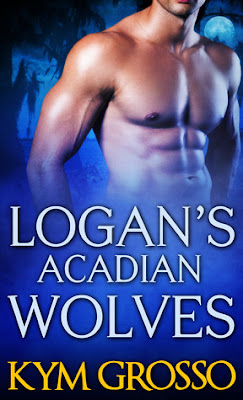 
“Odd vampire, isn’t he?” Wynter noted.
“That he is.  My gut tells me he abides by some code of honor, but don’t ever mistake him for anything but what he is,” Logan warned.
“A monster?”
Logan smiled.  “Battle not with monsters, lest ye become a monster.”
She laughed. “Another quote?”
“Friedrich Nietzsche,” Logan confirmed.  He took her hands in his. “We have a few hours before it’s time to leave.  I know I should be encouraging you to go relax, take a nap or something sensible like that.”
“Relax, huh?  How ‘bout a bubble bath?  Or a massage?”  She winked and dragged her finger down his chest.
“A bath sounds good to me as long as I’m in there with you.”  Logan pulled her flush to him, burying his head in her neck and growled. “You drive me crazy, do you know that?  I can’t keep my hands off you.”
Wynter giggled, growing aroused, loving the feel of his warm lips on her skin.  She looked over to the table and gave him a sexy smile.  “My Alpha,” she began seductively.  “You know, I just noticed that this is a really nice table.  Sturdy.  Long.  Hard.”
My Alpha?  Logan’s cock thickened at her words.  The table isn’t the only hard thing in this room, baby.  He glanced to its wooden top then back to her with a smile.
“African mahogany.  A friend custom made it for me.  You like?”
“Oh I like.  I mean, it looks very functional.  I bet we could get a lot of work done at this table,” she mused with a wink. Meeting his eyes, she gave him a suggestive smile and cocked her eyebrow. She slid her hand down between his legs and cupped his hard arousal.  “You know, I always wondered what it would be like to be a secretary.  I’ve been looking around here, and it seems you’re in need of some assistance.”
Logan hissed, closing his eyes.  Holy shit, that felt amazing.
“How about I fill in for your secretary today?” she asked. “I’m very good at dictation, sir.”
Wynter had never in her life been so forward.  But after making love to Logan, she craved him more than ever.  As though she were addicted to a drug, she needed more.  The warmth between her legs grew painful.  Feeling flirtatious and horny, she didn’t think it would take very long to entice him into her fantasy.
Logan eyed Wynter, hardly believing he could be so lucky.  His naughty little wolf wanted a romp in the office?  Seriously?  His brain said ‘no way’, but his burgeoning erection said, ‘hell yes’.  He’d have to be careful not to get carried away.  His wolf wanted this woman in the worst way, sought to claim her.
“Sweetheart, I don’t think you know what you’re askin’.  My wolf, he’s restless.”  He gently nipped at her collarbone, as if to give her fair warning.  If he took her, it was going to be rough and hard.
“But I do…I know exactly what I’m agreeing to.”  Wynter leaned into Logan and placed a kiss to his chin then dragged her tongue along his bottom lip and kissed him.


“Do you now?”  Logan grabbed a fistful of her hair, gently pulling her head backwards.  Revealing her neck, he licked at the hollow until she gasped.


Other Books in Series: 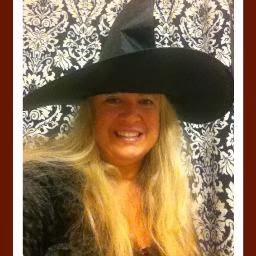 In addition to romance, Kym has written and published several articles about autism, and is passionate about autism advocacy. She writes about autism at PsychologyToday.com and AutismInRealLife.com. She also is a contributing essay author in the book Chicken Soup for the Soul: Raising Kids on the Spectrum.

Kym lives with her husband, two children, dog and cat. Her hobbies include autism advocacy, reading, tennis, zumba, traveling and spending time with her husband and children. New Orleans, with its rich culture, history and unique cuisine, is one of her favorite places to visit. Also, she loves traveling just about anywhere that has a beach or snow-covered mountains. On any given night, when not writing her own books, Kym can be found reading her Kindle, which is filled with hundreds of romances.


Where to Stalk Kym:

November 12 Spotlight and review
Books to Get Lost In
http://bookstogetlostin.blogspot.com

November 29 Interview
All I Want and More
http://alliwantandmorebooks.wordpress.com/

I LOVE THIS SERIES!!!! I love werewolves, packs, Alphas, betas, the dynamics that fall within a pack, dominating loving Alphas, sexy Alphas, strong Alphas, more werewolves and ohh yeah Alphas. lol Don't know if you could tell but I love werewolves and Alphas. Anyways this book was one of the best books about wolves that I've read in a really long time. Kym sucks you in from the very first page reading about the challenges Logan has to face till the very end determining what is going to happen to the pack.

Logan has become the new Alpha of the New Orleans pack, after the death of his very good friend Marcel. His dying wish for Logan was to become the Alpha of his pack and to protect them. Well one is not simply given the Alpha position, you earn it. And Logan has definitely earned it. He has chosen his Beta Dimirti and these two fit great together. I love their relationship. They joke with each other, pick on each other, share women together and just fit perfect as and Alpha and Beta. Finally, after establishing Logan's dominance there is peace among the pack. However, Logan has been having these visions about a woman who's throat is slit and he is somehow held back and has to watch. He has no idea who she is or what she is to him only that he cares about her in some form. And while out having a drink to celebrate with D running down the road is said vision girl and behind her are vampires. (Yes this book has them all).

We find out that Wynter has been held against her will and finally escaped after a huge ordeal. The vampires have been looking for something and have been using the good doctor to get that answer. Logan ends up taking care of Wynter and brings her under his protection. Now the interesting part of Wynter is that she was born human. Has been human all her life, however, when Logan first comes into contact with her she smells of wolf. Interesting right? I mean you are born a werewolf you can't be changed into it. So then how is Wynter wolf? Not only that the vampires are still after her. As well as a higher up.

Beyond her life being constantly in danger; this amazing chemistry between Logan and Wynter is there. Wynter is the first girl that Logan doesn't want to share with his Beta. And Logan discovers a few things about him and his "relationship" with Wynter as well. And D doesn't let up on what he knows even before his Alpha knows. The whole dynamic is pretty awesome. Anyways the steaminess between Logan and Wynter is....OMG there are not even words...just pure HAWT!!! I need to find me a werewolf man....*sigh*

Back to the story. Ultimately Logan will do anything to protect Wynter. But in his protection some bad things among his pack. Furthermore, how far will Logan go to keep Wynter safe? Will she ever really accept his offer? Can she ever be fully honest with him? What will happen when the people who had Wynter locked up come looking for her? How does Wynter feel about all of this? There are so many questions and a lot has to do with Wynter's past that she isn't talking about. But I will tell you there is a HUGE HUGE shock toward the end of this book. Soooo didn't see the one bad guy coming, but makes so much sense and I love the turn the book takes because of it. And Kym threw something in this book that I was like....What? No....wait come on...umm.....no? NOOOOOOOO ahhhhhhh and then I felt a little better. lol Overall, this was an amazing read and would highly recommend it to anyone and everyone!!!!

Incinerate
Posted by Meagan at 5:30 AM