Today we have a little bit different stop, but an awesome one at that. Brazen is having a battle and all the guys are all pretty hawt and steamy and have amazing answers!!!! So glad that Jeana and I could have them on our blog today....*still fanning self*


The six heroes from this month’s Brazens are battling it out to be your Mr. September. Who gets your vote?

Each day this week the six heroes are stopping by some awesome blogs to answer both sexy and sweet personal questions, so you can really get a taste of what they’re like ;)  Each day you get to cast your vote, and at the end of the week one sexy hero will be crowned the winner of the #MrSeptember Throwdown!

Remember, each vote also counts as an entry for one of SIX prizes so be sure to follow along and vote every day to increase your chances of winning!  Visit Entangled in Romance for a recap on the awesome prizes!

Now, to meet the men competing in the #MrSeptember Throwdown! 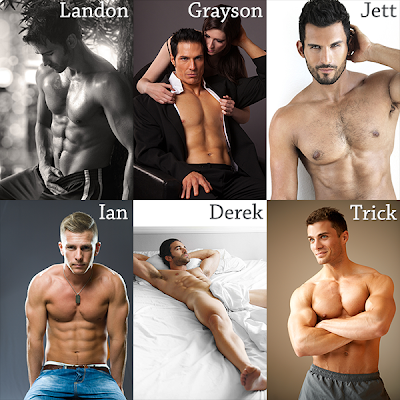 Whew! Hot, hot, hot - these men have definitely turned up the heat!

Here are today’s questions for the men:

Question #9: What kind of personality do you look for in a woman?

Ian: Confident, complicated, tough-on-the-outside but soft-on-the-inside, once she knows and trusts me.

Grayson: An independent woman who knows her own mind, and doesn't hesitate to speak her mind.

Derek: Feisty as hell, but soft when she needs to be. A woman who takes her responsibilities seriously, but also knows when to blow them off and spend the day underneath me in bed.

Jett: Killer sense of humor. It’s a huge turn-on to verbally spar with an intelligent woman. Great part of foreplay.

Craig: Fun, intelligent, someone who likes to laugh and love with equal intensity. A strong woman who matches me in every way. And if she likes to get a little - or a lot - freaky, even better.

Question #10: What’s your hottest “move” in the bedroom?

Ian: I’m a homicide detective, so I’ve always got the handcuffs handy.

Grayson: Ah, ah. As I said before, a gentleman never tells. However, I will say that it involves handcuffs.

Trick: I’m more of a hands-on kind of guy. If you give Gracie a call and have her come by, I’d be willing to demonstrate, though…

Jett: Whatever pleases her. I like seeing my woman get off. Mouth, hands, the rest…I like to think of the whole package rather than one specific move.

Craig: Let's just say I'm happy to spend a good long time on my knees before she gets on hers. Ladies come first in my book. And often.

Ahhhhh......I think I just melted into the floor from *swooning* because I was fanning myself so hard from these AMAZING answers.....so I might slightly be partial to Craig's answers....but the rest have a def second place...ish!! Anyways make sure to cast your vote for your favorite Mr. September!!!!

a Rafflecopter giveaway
Posted by Meagan at 3:28 AM