Blog Tour: Unleashed Under the Mistletoe by Isabel Winsor


The pretty girls never say yes to a guy like him.

But when Leo overhears the ladies in the office laughing at him behind his back, he does the unthinkable: he accepts a mysterious invitation to a secret group known as The Grove.

Thinking he's at an exclusive holiday business party, Leo is shocked when leather clad beauties order the guests to strip! 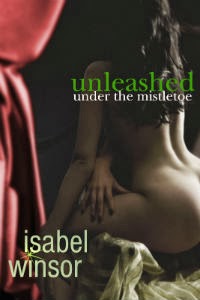 The moment Evie lays eyes on Leo, she's drawn by his dark, exotic good looks. Once she gets his clothes off and sees him for the shy but sexy guy he is, she's tempted to shed her Domina persona.

Savor your first taste of the Pleasure Grove.


"We will begin in fifteen minutes, Leo," Boyd said, sliding open the double pocket doors to a large, two-level room. A wall of narrow, wood-framed windows overlooked the tops of cypress trees and the restless silvery ocean.

"It is a pleasure to have you here," he said and then walked off.

Leo couldn't help but gawk at the authentic Arts & Crafts architecture and wood work. His attention snagged on one woman who licked her crimson lips as if she could taste him from where she stood. Leo self consciously ran his hand down the front of his pin-striped vest. She whispered to the man standing beside her. He glanced at Leo. A seductive grin lit his face.

He, the bartender and the couple were the only people in the room.

Leo nodded to the couple and went to the bar for liquid courage. He wished he had a date to bring to this thing. It would be another holiday season during which he made the rounds of parties solo; another New Years without someone to kiss.

"Will this be acceptable, sir?"said the bartender as he presented the bottle of 2002 Hourglass Cabernet. Leo tried to keep his mouth from dropping open. The last he checked, it was more than $100 a bottle.

He poured just enough for Leo to taste. This Cab would have knocked Bacchus on his ass. When Leo nodded, the bartender expertly poured and then wished him a good evening.

Leo should socialize, make some valuable connections; or at the very least, find out what this whole Grove thing was about. But the purring ocean lured him to the open windows. He hoped for the chance to explore the house. He'd seen it peeking through the trees when he jogged up and down Scenic Drive.

Chimes sounded in the room, cutting off the murmur of conversation. The bartenders and servers stopped what they were doing and filed out through a side door. Leo turned back to the crowd for some clue as to what would happen next. The doors opened and in marched two men, both dressed in black leather.

The long-haired Latin lover type strode up to the woman and tipped up her chin with a riding crop. Leo thought he was going to hit her but instead he did something even crazier and ripped her dress down to reveal her tea cup breasts.

He should put a stop to this. But the muscular Asian man boldly kissed the other man.

Leo turned, his instincts screaming to bolt for the door and fast. But then he saw her and all thoughts of escape vanished.

She stood in the center of the room, her brown hair curling down her back. Her innocent white dress was embroidered in the Mexican style with pink and red roses. Her arms and legs were lean and tan; feet bare and toes unpainted.

Raw need poured through Leo, filling in the hollow corners that had been carved open by too many failures with women. He couldn't pull his eyes away from the most beautiful woman he'd ever seen in real life. Experience taught him woman like her would never notice a guy like him. She watched the kinky goings-on with the calm gaze of a lioness.

"Good evening," she called out, her low, honey-toned voice sent shivers up his spine. "I see you have things in hand."

Leo's heart thundered and sweat beaded down his back. What the hell was this? He felt someone staring at him and pulled his gaze from her to find the Asian man's dark eyes flick from Leo to the woman in white and then back; sizing him up as if he questioned Leo's right to be here.

Leo couldn't make himself move. This wasn't real. He must have crashed his bike somewhere on the winding, bumpy streets of Carmel. In reality, he was probably splattered on the sidewalk as his mother and sisters had warned. All of this was happening in his coma-ridden head.

"You must be our third initiate," she said.

Her brown eyes, slightly tilted at the corners stared into his, probably seeing his thoughts scrambling around in panic. His mouth hung open. But hell, it wasn't every day a woman more beautiful than a Victoria's Secret model stood before him.

But she was and she was talking to him.

"Do you have a red or black envelope?"

He breathed in the honey and vanilla smell of her. She wore no make-up. That voice coming from those full pink lips, made his nerves scream.

"Then you need to undress." Her eyes travelled down to the uncomfortable bulge behind his zipper.

His mouth opened but no sound came out.

"You were invited for a reason. It's your choice to stay or to leave," she said, her gaze flicking back up to lock onto his. "But you need to make it now."


Top Ten Favorite Lines and the Characters Who Said Them

Up until Christmas Eve, I'll be spending a lot of time making Christmas – baking, knitting, cutting out paper snowflakes, you name it – which doesn't leave much energy for writing. But that's okay because when you have an eight year-old who wants to paint ornaments, you savor every minute with them before they turn into a surly, rebellious teenager!

So I spend my December watching movies and catching up on all the TV shows I've missed because I've been writing books for the past 11 months! I wanted to share my top 10 Favorite Lines and the Characters Who Said Them. Why would a writer choose movies and TV characters and not books? Well, (a) just about everyone has either seen or heard of the movies listed below and (b) these are characters and stories that refill my creative well every time I rewatch them.

1. "I'll think about that tomorrow." Scarlett O'Hara, Gone With The Wind - It takes a writer and an actress of remarkable talent to make a spoiled, vain, shallow rich girl into one of the world's most beloved characters. Scarlett is so bad that even if you hate her, you can't help but wonder what she'll do next.

2. "I'll have what she's having." The woman in the diner, When Harry Met Sally - If you haven't seen the infamous diner scene in which Meg Ryan fakes the big "O," please do yourself a favor and rent the film. The woman's response is genius comedic writing.

3. "Of all the gin joints, in all the towns, in all the world, she walks into mine." Rick, Casablanca - Up to this point we've seen Humphrey Bogart throw out a beautiful drunk woman who wants to sleep with him, diss a Nazi official and run into the woman he loved. This very private moment we see a man stripped of his armor and bleeding. It's beautiful acting and beautiful writing.

4. "Do or do not. There is no try." Yoda, The Empire Strikes Back - This tore me up as a kid. I totally got where Luke Skywalker was coming from. But now as a multi-published author, I get it. You have to do it and trust it.

5. "I know." Han Solo, The Empire Strikes Back - I still cry when Princess Leia yells out, "I love you" as Han is being lowered into the carbonite chamber. Ay yi yi! Throughout the story she has kept herself remote from him, guarding her desire with every fiber of her being. But just as she's about to lose him, all of her fears strip away and he responds with that smart alec comment! Such a man!

6. "Indiana Jones, I always knew some day you'd come walking back through my door." Marion Ravenwood, Raiders of the Lost Ark - My parents kept my brother and I out of school so we could see this movie. I remember being terrified by the giant boulder and then a little bored until Marion showed up. For a very impressionable young girl, her sass and strength made me sit up straight and see the kind of trouble she'd make for Indiana Jones.

7. "Lions, and tigers, and bears! Oh, my!" Dorothy Gale ,The Wizard of Oz - While Dorothy might be a whiny crybaby at times, she's also incredibly brave. Would you walk into a dark forest after being threatened by a witch? Often characters say one thing but do another and as a writer, reader and movie/TV watcher, I love it when they do that. Because it's their actions that really show who they are and what they're willing to do to get what they want.

9. "You are the boy that lived." Hagrid, Harry Potter and the Sorcerers Stone - I read the book before I saw the movie. When I read this line in the book and saw it on the screen, I got goose bumps. It is the classic moment when the hero realizes his world is about to change and the great adventure is just beginning. Readers and movie audiences expect it. They may not be able to pinpoint it but they feel it. As a writer it's hard to nail it. But when you do, as J.K. Rowling did, it sticks in your memory.

10. "If I wanted to be called a bitch to my face, I'd still be married." Brenda Lee Johnson, The Closer - You might be noticing a trend in that I love tough, smart women. Of all the episodes in this series, the pilot is my favorite. They throw everything but the kitchen sink at Brenda and she just steps out of the way and says, "Thank you. Thank you so much."

Eppp some awesome tv shows there and awesome quotes!!! Thank you sooooo much for sharing!!!!

Where to Stalk Isabel: