Raymond LaCasse had just completed his studies in Paris and was on his way home, to the French 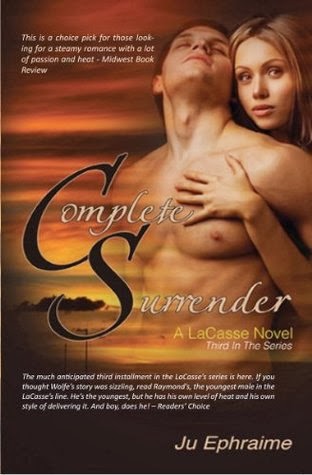 Caribbean island of Martinique, little did he know sharing a taxi with a beautiful stranger would change his life in ways he could have never imagined. His couldn’t get the beautiful woman out of his mind, long after she had collected her belongs and left the taxi they’d shared on the way to the airport. Who was this gorgeous woman? He wish the drive had been longer, so he could have spent a longer time in her company. He’d get his wish, but not in the way he’d imagined.

Gabrielle Descotte, a model by profession, had agreed to assist her brother in carrying out an illegal feat. She loved her brother dearly and would do anything for him, but when she met his intended target, Raymond LaCasse, she swiftly had a change of heart. She now had to choose, her brother or the man who occupies her every waking moment, to the exclusion of all else.

Divided by loyalties and bound by a desire that drives them into each other’s arms, Raymond and Gabrielle find themselves in a convoluted web of deceit and danger that almost destroy their new-found love and tear them apart….


This did not solve the problem of how he came to be carrying the woman's coat and not his own. He went through the coat and saw that she had only the phone in the coat. His coat, on the other hand, had all his personal belongings, his keys, wallet with credit card, his phone, and, of course, his gum and some wipes. He needed his coat only to get to the airport. Where he was going, he had no need for a coat. He'd have to wait until his plane landed in Martinique before he would try to find a way to get her coat back to her. What a quandary he’d found himself in now. He only hoped she would realize it was a genuine mistake and that he’d had no intention of stealing her coat, or had he subconsciously?


Ju Ephraime began writing professionally at the age of 19, but her love of romantic literature developed when she was a teenager, where she often found herself dallying with her own tales of love and romance.

Two decades later, Ju decided to write novels for women who enjoy a quick spicy-themed read that includes pure pleasure and escape from the real world. With nine romantic novels to her credit, Ju admits her books are part fact, part imagination – but only she knows what’s what. After writing Temptation to Sin, her fans didn’t want to let go of Jayden’s character, so she wrote a sequel to his story – and Against All Odds was effortlessly created in Ju’s mind. Without spoiling the tale for her fans, she firmly believes her readers will enjoy the twists and turns that Jayden and his new love Genna deal with to achieve insatiable undying love. Ju lives in Connecticut with her husband, who blushingly reads every loving tale that she publishes.

She has now released her third in her LaCasse series, Complete Surrender. Set in the beautiful French Caribbean of Martinique, the story of Raymond Lacasse and Gabrielle Descotte sizzles with a level of heat that only the French is reportedly able to achieve. Check it out for yourself, and then you decide.

Where to Stalk Ju:

a Rafflecopter giveaway
Posted by Meagan at 5:30 AM