First I wanted to thank H.M. Ward for selecting me as one of those who got this as an ARC. This was my first one and I can't even begin to say how excited I was. And it was an awesome read so that makes it all the better. And hopefully she will continue to do these so that her fans can help show their support with their blog posts and reviews.

I also want to give a big shot out because recently H.M. Ward found out that she has sold over one million books since she started self publishing in 2011. YEY!!!! I'm very excited and happy for her to have met such an accomplishment in such a short period of time!!

This book is considered New Adult Romance and I would tend to agree with that rating. There are some parts of this book that aren't for everyone to read. 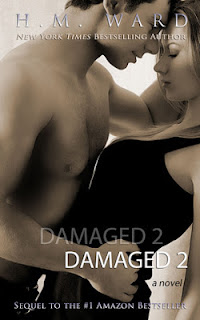 Home isn't supposed to be dangerous, but for Sidney it is. Returning home means that she has to face her past. It's not just the man who hurt Sidney that makes it horrible, but the family that didn't believe her. They were dead to her, but now that her mom is really dying things seem different. It's a chance to set things right.

What Sidney doesn't realize is that she's dragging Peter into a collision course with his past. Peter must deal with the demons haunting him if he wants to move forward with Sidney. He's willing to give up everything for her, even wade deeper into his past life to help her move forward. But, Peter isn't sure if he can get over what happened to him in New York.

First I would like to draw your attention to this book cover. Now don't get me wrong the cover is steamy and makes me excited to see how that plays out in the book, however, when I look at this guy compared to the hottie from the first cover.....they are different. First this guy is not as muscular and this guy has the dark hair and I would say that the first cover the guy kind of has more of a sandy blonde hair. But yeah that's just a side note.

This story picks up right where the last one left off. However, I will say I'm not sure if I've ever experienced so many different emotions in such a short time span as I did with this book. Also as a side note this book co-insides with another series by H.M. Ward, which is the Arrangement series. However, it is not mandatory that you read this series (although I HIGHLY recommend it because it gives you a better sense of the new characters that are introduced in this book).

One of the first things that happens in this book is that Peter asks Sidney what she knows about the Ferro family. As she is slightly confused as this question she begins to answer him. It isn't until she really gets into some of the details about the father, mother and three sons that she realizes who it is that Peter really is. Instead of Dr. Peter Granz standing in front of her she knows that he is really Pete Ferro who has quite the history. Also if anyone is curious where the Granz came from….his dead girlfriend/fiancée. Now while on some level I understand this, it is also kind of weird. I mean really what if 5 years down the line Sidney and Peter decided that (in a different world) they wanted to get married….she’s going to be taking the name of his dead girlfriend/fiancée…..awkward much? Well anyways when finding out this information everything goes downhill. They start fighting because the reality of the situation is that Peter would probably never have told her the truth if he didn’t have to. For her he lied at the core of everything and she puts him up there with craptastic Dean. And of course with any argument those that have the Y chromosome tend to be extra dumb and say things they really don’t mean and this situation was no different. Peter tells Sidney, “Walk through that door and don’t come back.” And what does my girl do? Walk out the door and not look back.

Sidney is still going to make the trip up to Jersey to see her mother before she dies. The original intention was to go with Peter, but since that currently is not going to happen, she decides to go by herself. Because I’m sure that is a fantastic idea considering all the facts and everything. Two points for the smart chick. Well thank god for best friends because Millie talks Sidney into letting her go with her and Sidney tells her everything that happened and when I mean everything I mean everything and they have a “good” bonding moment between the two of them.

Eventually they need to stop for gas and out of all of the places to stop they stop at the same one douche bag Dean is at. So of course Dean does what Dean does best walks up and says, “Hey baby.” Really? Not been together how long? You saw her with another man and you still going to call her hey baby? Ewww. Anyways of course an altercation starts up because we need drama in our reading. But it also escalates besides a few choice words thrown at each other and dun dun dun duh Peter comes to the rescue and then some. Go Peter Go Peter kick douches butt!! WOOT WOOT!!

After this it is decided (by Peter) that Millie will no longer be joining the trip with Sidney, but Peter will be with her for the rest of the trip and what an awkward trip it is. They make a stop at a motel for the night and end up in the honeymoon suite. hehehe and it’s even more awkward than the silent care ride, but very amusing, especially since the nice old lady who owns the place knows Peter Ferro personally.

From here tension just builds and builds and it’s not just the sexual tension, it gets to the point that Peter tells Sidney, “I gave you a chance to know me like that and you threw it away. I don’t give second chances, Colleli. You have no right to ask me anything like that anymore.” Ouch….I mean kinda harsh…yes she kind of deserves it, but at the same time she doesn’t and she has gone through a lot of stuff….come on now.

At this point in the story is where the humor (among other emotions) starts to come into play. Sidney wears a towel (over her clothes) to bed…you’ll have to read to find the humor behind why she does this. I love that she tells Peter, “If you try to take it from me, I will kill you.” So if there was any doubt about not touching or removing the towel those have been answered. And then a little later in their fighting when Peter truly sees something that is behind a lot of Sidney’s emotions he has an aww….moment. “I won’t hurt you Sidney. No matter what happens between us, I promise you that.” See…..awww…..such a sweet twisted man.

After Sidney goes to sleep that night we truly find out the first time Dean…..violated (and that is putting it mildly) Sidney. After reading this part I had tears in my eyes and I guess for lack of a better understanding, felt sick. I know the imagination can do a lot, but reading this, it felt “real” in a sense and gave me a truly better understanding of Sidney’s character and how far she has truly come in her life. Ohhh and it also makes me want to kick the crap out of Dean (if he were real) over and over and over again.

When they are on the road again one of my favorite scenes happens. Sidney is driving and there are birds in the road, thinking they are going to move she keeps going and one bird doesn’t move. So instead of hitting the bird in the middle of the freeway, Sidney swerves to miss and then her and Peter go get the bird out of the middle of the road. If that wasn’t enough….she takes the bird and is going to get it fixed because obviously he is hurt. She keeps calling it a Turkey, but that’s really not what it is. The best part is the fact that the “turkey” is with Sidney the rest of the book…..it has some pretty awesome moments…for a bird and all.

Peter and Sidney need to take a detour through New York to meet up with Peter’s eldest brother Sean before heading to Jersey. I honestly think this was my favorite part of the book…..I laughed so hard at the whole thing. Sean and Avery are from the Arrangement series and it is told by Avery’s point of view so in this book we get Sidney’s point of view and the reader actually get’s to see how someone perceives Avery. By the way I love Avery. I have a love-hate relationship with Sean and that’s only because he can’t get his head out of his ass to see straight and speak up like he does about everything else in his life. I will only give a few lines from this scene because it has to be read to fully appreciate the whole context, but when Sean goes to introduce Avery to Peter and Sidney it goes like this, “This is Avery Stanz, my…” “Your, what?” Avery says, as she leans forward and bats her eye lashes at him. And because Sean remains silent Avery states, “I’m Avery Stanz, his favorite call girl.” OMG really if you were Sidney meeting these people for the first time what would you think?? So I find the whole situation comical especially because Sean doesn’t like Sidney because she throws his crap right back in his face constantly.

After this a lot happens. We meet the rest of the Ferro family. That’s an interesting family that Peter belongs to. I grow to hate Sean some more. I slightly like the youngest Ferro, Jonathan. There are some sad tearful moments. And some HELL YEAH moments. Some more aww…moments and I like the way the book ends. Peter and Sidney go through a lot of stuff through the book....since starting off the road trip on a bad note. Sidney finally comes to terms with the whole her and Dean issue and I must say I love that part. However, the book gives the reader enough closer for this story, but is able to continue on because of two other series that H.M. Ward is writing. Overall this was an excellent read and I read it in one day because I just couldn't put it down. I laughed, I cried, I was happy, I was sad, and some many other emotions all rolled into one. I recommend this as a MUST read.

As a final last note....I will still say that I am sad because my character Mark doesn't make an appearance in this book and it makes me sad.....I really wanted something to happen for him in this one.

Incinerate
Posted by Meagan at 9:00 AM