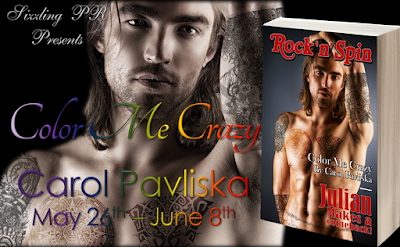 Never fall for a rockstar...   Julian Wheaton views the world through a kaleidoscope of synesthesia, seeing the colors of every sound he hears. His life as an iconic rock guitarist was a stressful psychedelic trip that nearly destroyed him. Now he’s abandoned the rock ’n’ roll lifestyle for the peaceful sanctity of his recording studio, but when fiery Cleo Compton comes to work for him, she brings chaos with her.   Cleo Compton has had her flings with rockstars—and it’s left her wary and bruised. Julian may have those sexy bedroom eyes and drool-worthy tattoos, but Cleo is determined to keep things strictly professional—until Julian turns out to be every dream she’s ever chased. When 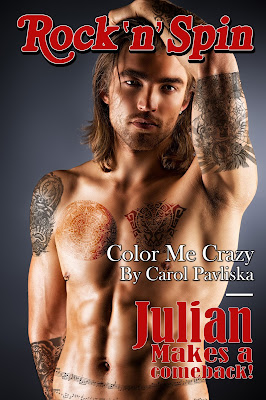 he risks it all to hit the road with a band again, Cleo fears he’ll return as the one thing she can no longer abide—a rockstar.

Julian tingled all over. His vision was clouded with colors that weren’t even associated with sounds. A guitar would help. Cleo was killing him. It was time to power through the outer edges of lust and get to the eye of the storm. In other words, to where reality set in and her endless faults irritated him instead of turning him on. She had moved in under the guise of working until she could get back on her feet. Nobody had come out and said that, but it was the unspoken understanding. Instead, she was working her sweet little ass off and doing a bang-up job. And if that weren’t bad enough, he fucking liked her. And he didn’t want to like her. He sat on the bed and reached for his faithful Fender. Predictably, it was already plugged into an amp. He liked predictable. He ordered his life around it. And now Cleo had muddied it all up by barging into his life—and his heart— uninvited. That had only happened once before, and it had been disastrous. He ran his fingers over the tattoos on his forearm, feeling the small scars beneath the ink. If only everything in his past was as easy to hide. He leaned back against the headboard, letting the weight of the guitar settle into his lap. If he was patient, a song would come. At first, it was a single turquoise note, but he quickly teased a rainbow out of it. A few sexy thoughts of Cleo were teased up as well, and he settled the guitar lower on his hips. His head sank back as a melodic strain poured through him. The instrument moaned in ecstasy as he bent a note up, coaxing, enticing, and sweet-talking a candy-apple wail out of it before bringing it down with a shudder. With Cleo in mind, he tickled the strings and stroked the neck, caressing a deep, mellow tone from somewhere inside the guitar’s polished wood. He raised his hips and built a crescendo, bringing the guitar to a fucking scream. He’d like to make Cleo scream… “Knock, knock. Julian?” With a pathetic flat wail, he tossed the guitar aside and hastily sat up. “Excuse me,” Cleo Not wanking off. 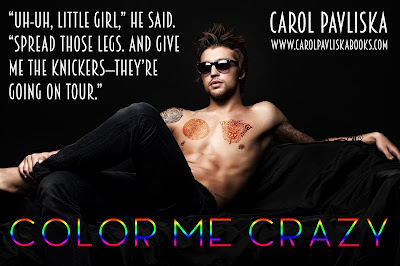 said, exploding into a scarlet blush. “I’m sorry…” “I was just playing guitar,” he stammered.

Carol Pavliska began her writing career as a family humor columnist and blogger, a pursuit she abandoned when her children became old enough to realize they were being exploited. To save them from further embarrassment, she turned to writing fiction. The kids are still embarrassed.   When she’s not creating unrealistic expectations as a romance writer (ripped abs, dramatic temperaments, and eyes like bottomless pools of Hey Girl), she functions quite nicely in her real world, which consists of a delightfully stable husband and five children.   Carol and her husband, both die hard Red Hot Chili Peppers fans, raise their vegan brood of mortified offspring on a cattle ranch in South Texas. No lie.