Talk about kicking a fighter while he’s down.

Former Middleweight champion and confirmed bachelor Tommy "Lightning" Sparks has lost it all: his belt, his career, and now his home. After the devastating fire, he moves in with his drama-free best friend, Julie. One encounter changes everything and Julie is no longer the girl he’s spent his life protecting but a desirable woman he wants to take to his bed. Knowing his reputation, he’s determined to protect Julie more than ever 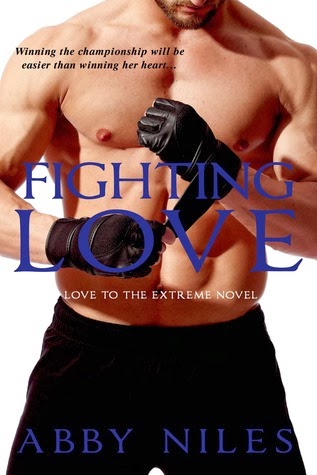 Veterinarian Julie Rogers has been in love with Tommy since she was ten, but would love to get over the man. She’s quiet nights at home and a glass of wine. He’s clubbing all night and shots of tequila. As friends they work great. As a couple? No way in hell. She just can’t get her heart to agree. When she starts spending time with another fighter, the man who’s always treated her like a sister is suddenly not being very brotherly and enflames her body like never before.

Can two childhood friends make a relationship work, or will they lose everything because they stopped Fighting Love.


Abby Niles has always loved to read. After having twins and becoming a stay-at-home mom, she started doodling stories to keep her sanity. She didn’t plan for writing to become an obsession, but it did. Today, she juggles work, home life, and writing. It’s not always easy, but hey, who said life was easy? When Abby’s not writing, you can find her playing ‘Just Dance’ with her kids or trying to catch up on her never-ending to-be-read list.

Where to Stalk Abby:

*sigh* I am so in love with Tommy it isn't even funny. I feel like I've been jipped in life. So Tommy has been having a pretty rough go at it lately. He was removed from the MMA world and after a run with his dog he comes back to find out his house is on fire and burning to the ground. It is then that he remembers a box in his house and he goes into the burning house to get it. We find out a little later why that box was so important and I love the reason behind it. So with no place to go and losing everything he owns but his dog and the clothes on his body he calls his best friend Julie. Okay now let me say this book hits so close to home for me and most likely a lot of girls. Julie and Tommy have been best friends since they were 10 and since they were 10 Julie has been in love with Tommy. And Tommy....being the idiot he is has never had those feelings for her and has gone through women like it's a dying breed.

So while Tommy tries to get his life back together he stays with Julie...which isn't odd or anything because these two are super close and obviously this isn't the first time he's stayed over in the spare bedroom. So while Julie is handling the ups and downs of emotions with Tommy staying in her home in walks Brody into her life. And can I tell you how much I love Brody and I want a book about him. *hint hint* But Brody is also from the MMA world and starts dating Julie. And this makes Tommy get interesting. He can't intimidate Brody and that changes the game for him and he realizes that he has feelings for Julie. The problem is Tommy doesn't do relationships. He doesn't stay the night or see the same girl more than once. And he doesn't sleep or screw over his best friend and only person he's truly considered family. So this causes a lot of interesting scenes. I love the way that Tommy constantly overreacts because I think it is these moments that his true feelings come out. And again I love Brody and his stupid smirk and the reason behind it is pure genus. And again I want a story about him. :)

Any ways as the story continues the sexual tension between Julie and Tommy grows and OMG I want to slap the crap out of him. I kept yelling at my nook when it came to Tommy and the "relationship" with Julie. As Julie keeps tempting Tommy and wearing him down....they finally start something. And he's trying to be good for her. But things get complicated when the possibility of getting back into the MMA world stands right in front of Tommy. Now the reason this complicates things is because when Tommy was in the MMA world he pretty much forgot about Julie. It wasn't intentional, but she was just the best friend and he enjoyed the spotlight. Now that they have this relationship what will happen? Will she walk away from Tommy for forever? Will he go back to the way it was before and lose Julie? What will happen with their relationship now? Will he walk away from the MMA? OMG so many questions. And this book doesn't leave you wanting. OMG I was sobbing at the end because it was breaking my heart and there are just not enough words to talk about my emotions that came with the end of this book. The last 5 pages made this book and the rest was just amazingness that lead up to it. The interview that Tommy gives at the end....*sigh* it would make any girl cry with emotion. For me it was like watching the Notebook....with those kind of emotions. Abby Niles wrote this book brilliantly and I'm so in love with her and Tommy and Julie's characters and of course Brody. I really really really want this book as a movie because every page I read I just saw it playing out and I think it would be an AMAZING movie....somewhat like a modern day Rocky.....but slightly different lol but I highly recommend this book as your next book to read.