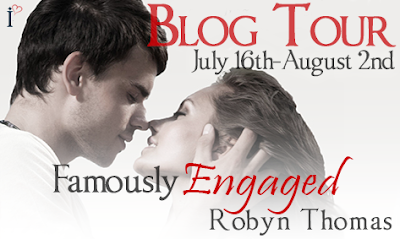 Okay so next stop on my blog is the Famously Engaged blog tour by Robyn Thomas. I must say for being a paranormal fanatic......I've gotten pretty far from them the last month or so. But don't get me wrong, I've rather overly enjoyed all the recent books I've read and reviewed and have gotten to add some awesome authors to my favorites list...and Robyn is one of those authors. Especially, because all of the books the authors are writing are the way I wish a lot of authors did. One chapter or so from the girls perspective and then one from the guys perspective. I LOVE IT!!! And this book is no different. In this blog there are a few different things going on. We have information about Robyn and how to stalk her on the internet. A little blurb about the book. An excerpt from this awesome book and of course a giveaway. Ohh and my review. 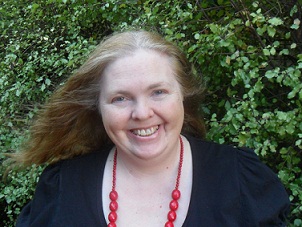 Where to Stalk Robyn: 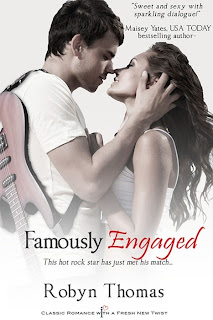 A chef and a rock star. They couldn't be from more different worlds…

Rock star royalty’s favorite son, Jake Olsen, couldn’t help but interfere after listening to his future brother-in-law talk non-stop about his ex-wife, Beth Carlisle. Jake decides that the only way to get the groom’s mind off his ex-wife is to give her a fake fiancé.
Before Jake can convince Beth of his plan, he's forced to move in with her to avoid the paparazzi. Their instant attraction makes for a sizzling "first date", but soon Jake’s fame gets in the way and Beth wants out. Too bad Jake's figured out just why her ex is so obsessed with her, and he's afraid he's not going to be able to give her up either.

Now it's up to Jake to convince this chef together they make the perfect recipe.


“Tell me, Jake, how famous do you have to be before you stop caring about anyone except yourself? I didn’t ask for you to come here on one of the worst days of my life. I haven’t trapped you in a public engagement or accused you of adultery or insulted your clothing choices or checked you out and then passed because you weren’t up to my usual standard.”

In the space of a heartbeat he braced his hands atop the counter on either side of her hips, his jaw tight as he leaned his head down to her eye level. “That’s not what happened.”

“Sure it is.” She swallowed, unsure if she wanted to quantify her current needs. “All I want is for someone vaguely human to hold my freaking hand for five minutes while I fall asleep, and you won’t do it,”

His mouth met hers almost before she’d finished speaking. It was a kiss unlike any she’d ever had, so achingly gentle that she felt her lips trembling beneath his. She held her breath and locked her knees. Jake’s fingertips played over her temples before drifting through her hair in a barely there cares, the back of his hands circling her ears. She gasped at the spear of heat that arrowed through her when his thumbs and forefingers closed over her lobes and tugged in a gentle rhythm.

So I really enjoyed this book, however, I found some of the relationships very "odd" in their workings. The story starts out with Skyla talking to Jake, who is her boss and also a rock star singer, and ohhh he's her half-brother and she doesn't know yet. Skyla is talking about her wedding and sent a picture of her maid of honor, Beth, to Jake. Beth is friends with Skyla and also Brad's (Skyla's soon-to-be-husband) ex-wife. Awkward much? Ohh and if that wasn't bad enough Brad and Beth talk like every day, several times a day and while Beth's mother has been sick has been staying over there to help take care of her. My reaction is a lot like Jake's, why in the world are the ex's spending time together and still "best friends" when they are divorced. Not only that Beth is heavily involved in the wedding, she's the wedding planner and the maid of honor. Seriously AWKWARD. So with that said Jake decides to take it upon himself to investigate the situation to determine is Brad is still hung up on his ex and stop the wedding if need be because his little half-sister deserves the best.

When Brad mentions to Skyla that he thinks one of them should move in with Beth, to better help take care of her mother, Jake jumps all over the situation. Not only will he be spending time with a gorgeous woman, but keeping Brad away from said woman. I love the first meeting of Jake and Beth; it's priceless.

As Beth answers the phone, "You're not moving in," she told the caller. "And you can't come over for dinner either, because I've just set it alight. If you want to read me the riot act about nutrition and balance, then you'd better make it snappy. Someones at the door and my kitchen smells like molten saucepan and burned butter."

Silence greeted her confession and she paused with her and on the doorknob. "It's you, isn't it? You're at my front door and I've just told you all that for nothing."

Without waiting for a response, she swung open the heavy oak door and gaped at a handsome stranger with a mobile phone pressed to his ear. Six feet of gorgeous masculinity graced her doorstep, broad shoulders filling out an overcoat that looked tailor-made.

As he smiles, "Ah, the face of indecision. Which part are you reconsidering? Dinner? Or moving in?"

From here they argue/talk about how he has come to stay with her instead of Brad and she adamantly tells him no. Eventually, he works his way into the house, but only after 2 reporters see him and take a picture of him and Beth and go with the story that they are engaged, because rumor has it Jake has a ring with him that he recently picked up from a jewelry store. The ring is actually for Skyla, it's a family heirloom, but the public doesn't know about Skyla and Jake wants to keep it that way. Back to Beth and Jake, instead of correcting the story, what do we do? We go with it. Yes this is Beth and we are engaged. YEY!!! So now Beth is engaged to a famous rock star that she just met.

From here the two get to know each other a little better, since they have to play the part of loving each other with plans of getting married. It's during this time that Beth truly gets to see who the real Jake is and Jake, poor Jake, man didn't have a chance. He fell for Beth as soon as he saw a photo of her and when talking to her he was gone. She's got spunk and attitude and doesn't put up with crap, especially his crap. It's super sweet really. But Jake also tells Beth his real intentions of his trip; he doesn't trust Brad and Beth's relationship and has come to make sure nothing happens for Skyla's sake.

Interestingly enough on the first night of his staying Beth uses Jake as her pillow to fall asleep on because she needs a shoulder to lean on. And then my favorite type of scene happens. As they are talking and it gets a little heated Jake kisses her. And the description is one of those life altering so in love I can't see or think straight, butterflies in my stomach and time stops kind of moment. (It's part of the excerpt from above). It was a kiss unlike any she'd ever had, so achingly gentle that she felt her lips trembling beneath his. She held her breath and locked her knees. Jake's fingertips played over her temples before drifting through her hair in a barley there caress, the backs of his and circling her ears. She gasped at the spear of heat that arrowed through her when his thumbs and forefingers closed over her lobes and tugged in a gentle rhythm. As Jake keeps trying to do the right thing, Beth has the exact opposite in mind. She wants to get lost in Jake and forget the world around her and he does exactly that for her. And when these two get down and dirty its like down and dirty and steamy and hawt and sexy and O.M.G. lol

Ohhh and side note keep an eye out for supersoft chickens. Those are the best lines of the story.

As the story continues it's clear to see how much Jake is getting under Beth's skin and how much she is affecting him. They are beginning to care about each other, but the reality of the situation is that it would never work. Jake's first marriage/love is his band and doesn't really do the whole dating thing, even though he's known as a ladies man. Eventually, the rest of the band shows up at Beth's door and I love Liam. He's that funny little brother that everyone wishes they had. But between the band, the chef, and Christophe and all the reporters on her lawn its a lot for Beth to take it. It's the things like this that show Beth what life with Jake would really be like and make her question if she can ever do something like this day in and day out. There has been so much chaos that surrounds Beth since Jake showed up on her doorstep, can anyone really handle that?

Both Jake and Beth need to decide what they want. Can Jake even think about a real relationship and give Beth what she truly deserves? Can Beth deal with all the media and cameras in your face? Will the band (except Liam) accept Beth and not think she is in it for the money? What will Brad do? What about poor Skyla? Will she ever know she has a big older half-brother? What about the wedding? Does Brad still have a thing for Beth? Can Jake walk away from Beth? That's my biggest question that I want to know. I'm hoping that maybe Robyn will carry on this story, even from another's perspective? Maybe? I really fell in love with the characters and I'm not ready to end my time with them, I want more. Other than that it was a great read and I'm sure you'll enjoy it too, I mean who wouldn't want to read about hawt, sexy rock stars and them possibly falling in love with a not famous person. It's almost like it could happen for someone like me...or you. Thank you Robyn for the awesome read!!!!

a Rafflecopter giveaway
Posted by Meagan at 11:16 AM