Entangled Publishing is turning 5 and we are so excited that we are offering all the books on our latest bestselling imprint, Lovestruck, at a celebratory price of just $.99 each! At prices like these be sure to fill up your reader.

AND that's not all. From 2/1 to 2/21 we are giving away 5 Lovestruck prize packs including 5 different Sephora Minimergency kits, an Amazon gift card and other surprise gift cards. So be sure to stop by each of our amazing blogger hosts below and visit the Lovestruck Facebook page to find out about the fun events and giveaways we will be having in the coming weeks. You will also get sneak peeks inside our different releases so you can pick out your must reads.

We will also be having a Facebook party on Thursday, February 11th from 8-10pm ET where several of our Lovestruck authors will be chatting with readers and offering prizes as well. So join us on the Entangled Publishing Facebook page.

She stood taller against him, having changed into a pair of her signature crazy-high heels. As much as he knew his relationship with Libby was fake, he couldn’t help imagining what she’d look like in only those heels. Like dessert and heaven and sex rolled into one, he’d bet.

Her hand rested lightly on his arm, her body pushed against him. She teetered on the unsteady paving of his parents’ front steps. Each bump of her hip sent a shot of heat through him. 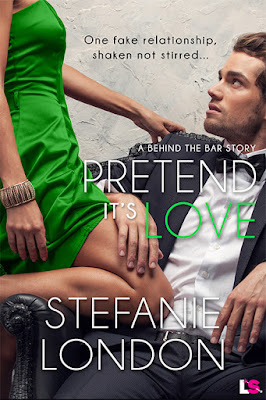 and that perky butt encased in faded denim. In all likelihood he’d failed but, judging by some of the looks she’d thrown him, the feeling was mutual.

“You’re asking for trouble in those shoes,” he said, forcing his attention to something safer than Libby’s distracting curves.

“I’m asking for trouble anyway.” She offered him a sly smile as he rang the doorbell. “The shoes are just the cherry on top.”

Paul was about to ask her what kind of trouble she preferred when a thumping noise came from the house followed by footsteps. “You’re not scared of dogs, are you?”

Libby’s eyes widened as she stepped toward the door. “Not really…I don’t think.”

At that moment the front door burst open and the Chapmans’ very large, very excited Great Dane burst forth. He immediately locked onto Libby and jumped up, throwing his paws over her shoulders.

“Oh my God!” She wobbled on her heels, but Paul grabbed her around the waist from behind, preventing her from toppling over and taking the dog with her.

She stumbled back against him, her ass pushing squarely against his groin as she tried to wriggle free from the dog’s grip. If she hadn’t known about his attraction to her before, she would now.

Trust his libido to come back in full force with the one girl who had a “no sex” policy.

“Down, Cavallo!” His mother’s voice rang out over the commotion. “Siediti!”

The dog relinquished, its large tail thumping against the doorframe. Even seated, the top of his head came up to the bottom of Libby’s ribcage. Cavallo sniffed her and then proceeded to wipe a long strip of doggy drool across her jeans.

“I am so sorry,” his mother said, shooing the dog inside. “He gets very excited when we have guests.”

“It’s okay.” Libby blinked, looking down at her jeans and then back up to Paul, stifling a smile.

“Excitement is a natural thing.”

Paul tried to subtly adjust the front of his jeans so his hard-on wouldn’t be noticeable, but the quick flick of Libby’s eyes told him he’d been well and truly sprung.

Bar manager Paul Chapman is sick of his family’s traditional ideals. Marriage, babies, and a white picket fence? Not his gig. But now that his ‘golden child’ big brother is tying the knot, Paul’s screwed. His ex will be there...and she’s having his cousin’s baby. Unless he wants to show up to the wedding alone and face his family’s scrutiny, he needs a girl on his arm. Now.

Cocktail specialist Libby Harris has spent her life earning the nickname Little Miss Perfect, all to win the love of her wealthy, controlling father. But she deviated from his plan, and now her business is on shaky ground. If it fails, she might as well kiss his respect—and her dream—good-bye. Her only hope? Convince the hottest bar in town to take on her product.

Luckily for her, the owner’s brother is sexy as sin and in need of a perfect girlfriend...

He groaned and ripped himself away from her, his dick throbbing so hard he wasn’t sure he’d be able to walk down to the lobby. But stopping what was about to happen was not an option. Hell, he’d crawl to the damn lobby if he had to.

Oz gave her one last kiss and then lurched off the bed. He grabbed his jeans off the floor and yanked 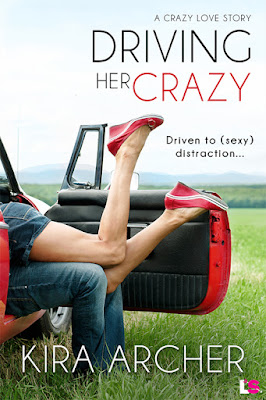 them on while she snatched her purse from the table and dug through it.

“Here,” she said, slapping a handful of change into his hands. Coins went everywhere. He caught as many as he could and shoved them into his pocket, then reached out to drag her back to him.

They walked backwards, their lips fused together, their bodies glued to each other, until he bumped into the door. He fumbled for the handle, still not breaking their kiss. He finally got the door open and they broke apart, both dragging in ragged breaths.

She stood there, panting, her silk gown torn high enough to give him a glimpse of what he was missing, her mouth swollen from his kiss. It was physically painful to leave her. But he was out of options. Because not claiming her was off the table.

“Don’t finish without me,” he said with a wink, then took off down the stairs as fast as he could.

Cher Debusshere hates being the black sheep of her posh, well-to-do family almost as much as she hates driving-which is exactly what she's forced to do when her flight home for her perfect sister's wedding is grounded. Fan-freakin'-tastic. Then a hot guy offers to share both the car rental and the driving duties...only to drive her crazy by assuming she's just some spoiled little rich girl.

Mechanic Nathaniel "Oz" Oserkowski is about as blue-collar as they come. There's never been a time he hasn't worked his ass off, and he's determined to prove it to the gorgeous princess in the passenger seat. As the miles pass, they bait and needle each other...until their lust and longing gets so hot it nearly overheats the engine.

They have nothing in common. Hell, they can barely stand each other. But sometimes it takes a journey to change the destination...

Flirting with the Competition by Kerri Carpenter Excerpt

This is so wrong. They’d started as enemies, then found out they were actually competitors. At the end of the day, one of them would get the job and the other would be devastated. 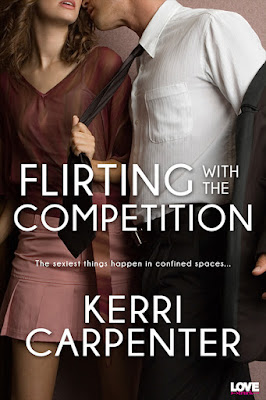 But at some point, they’d opened up to each other. He’d offered her a glimpse of the real him. And she hadn’t gone running. Yet. But she hadn’t exactly given him the green light, either.
He couldn’t pinpoint when things had shifted, but he realized it didn’t matter. All he could think about at the moment was Whitney’s lips and how much he wanted to kiss them.

Under normal circumstances, Whitney March might have appreciated sharing an elevator with a ridiculously attractive and clearly wealthy guy. Even enjoyed it. But when her companion turns out to be the man who almost ran her over in parking garage moments earlier? Nope and nope. Besides, she’s on her way to a job interview at a prestigious law firm, and she needs to stay focused. Not staring at the rich and sexy jerk.

Then the elevator comes to an abrupt stop. They’re stuck.

Jordan Campbell has every intention of acing the interview for his dream job, and he’s not about to let anything stop him. Not even the sexy, capable, and fiery woman who turns out to be his main competitor he’s trapped with. The only thing they have in common is determination to get the job…and an escalating attraction. And it’s only a matter of time before these competitors indulge in a very sexy little connection between floors.